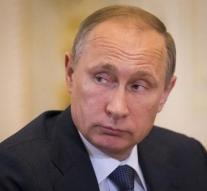 strasbourg - The European Union must do more if IS against the increased propaganda of Russia and terrorist organizations. The European Parliament called Wednesday on the strengthening of the nine-strong EU team 'disinformation attacks' trying to parry.

The propaganda is sowing fear and doubt and divides the EU, says the parliament. To empower the public would be awareness campaigns, education and media should be deployed.

More and more countries have passed since Russia's aggression in Ukraine is guilty of spreading false information and propaganda through think tanks, TV channels like Russia Today and social media, according to the Polish Parliament rapporteur Anna Fotyga. The Kremlin also finances according to its European populist and far-right political parties that are anti-EU.

The Russian Foreign Ministry rejected the allegations and said in Russian media of 'discrimination. 'The parliament would be afraid of the' effective 'work of the Russian press.