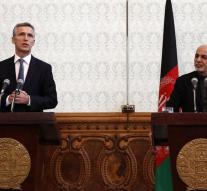 brussels - NATO's military training mission in Afghanistan is being expanded. Fifteen countries have committed to deliver additional troops to the Resolute Support operation, which helps the Afghan army in the fight against Islamic extremism.

Jens Stoltenberg, Secretary General of the Military Alliance, said that Thursday before the start of consultation of NATO Defense Ministers in Brussels. He does not expect to be able to mention concrete numbers yet.

The mission now consists of over 12,000 men, especially Americans. The United States had said that more than one thousand troops wanted to be added. Among other things, the United Kingdom and Denmark have promised mansions. Stoltenberg said looking forward to commitments from other countries.

The Netherlands is involved with about one hundred soldiers, who train and advise senior officers in Mazar-e-Sharif under German command. Minister Jeanine Hennis (Defense) said last week that the Dutch contribution is not 'substantially altered or expanded. '