Home / World / More migrants are drowning on their way to Spain 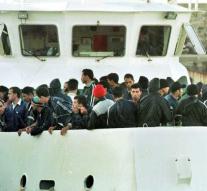 geneva - Certainly 631 African migrants died this year when they tried to reach Spain via the sea. That number is nearly three times as large as last year and the International Organization for Immigration (IOM) calls the situation alarming.

Spain is for more and more refugees the country to reach Europe. In November, 120 asylum seekers arrived every day from countries in North Africa and around the Sahel. In October, 350 migrants per day.

Also in Italy, such as on the island of Lampedusa, many migrants arrive by boat.

The migrants take greater risks by going into the Mediterranean in smaller and less seaworthy boats. They sometimes pay up to thousands of euros for people smugglers.