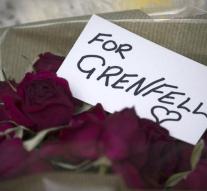 london - The London police announce new figures on Monday's estimated number of deaths as a result of the fire in the Grenfell Tower. The death toll is 58, but according to police commissioner Stuart Cundy is definitely increased.

Among the 58 deaths there are thirty of whom the death is confirmed. The rest was definitely in the apartment when the fire broke out, but did not report afterwards so it should be assumed that they were killed.

The police assume that there were still more people in the Grenfell Tower, whose presence has not been reported to her for some reason. Cundy called on people to do so if they knew someone living in Grenfell was visiting or staying. 'We do not need to know why you have not told us before. '

The police released images of the ravage in the burned flats on Sunday. Police and emergency teams have gone through the tower from bottom to top and now have to conduct a complete and systematic forensic investigation. The images make it clear that this will be a long-lasting job, which will take weeks. 'We must also prepare people for the terrible truth that the intensity of the fires of some people can no longer identify the identity. '