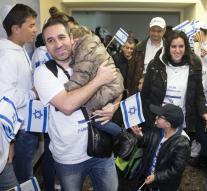 - Almost 30,000 Jews have immigrated to Israel last year. According to figures from the Jewish Agency for Israel, which Israeli media reported Saturday. It is the highest number of newcomers in the country in fifteen years.

There moved striking many French people to the Jewish state. There were about 7900 with about 10 percent more than last year. According to expert play the attacks in Paris, which also found a number of Jews to the death, an important role in the decision to emigrate to Israel. Apart from France, also came many immigrants from Ukraine.