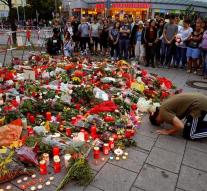 - Authorities in Munich have adjusted the number of wounded by the shooting Friday upwards.

There are now 35 injured ten of whom were seriously injured. Previously, there was about 21 wounded. Bavarian Health Service now employs several people with wounded elsewhere in the city in the panic that followed the shooting.

A 18-year-old German Iranian began to shoot wildly around in a shopping center in the northwest of the city. Nine people lost their lives. The gunman committed suicide.