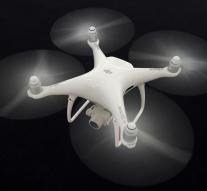 the hague - Now that more people have a drone, the number of reports on incidents also increases. The IMT and Transport Inspectorate (ILT) announced Thursday that the service received a total of 64 reports of incidents with a drone in 2016.

That's more than four times as much as in 2015, when fifteen incidents were reported. Until May 2017, the ILT recorded 33 reports. Often it's pilots who saw a drone near their cockpit because the drone flew at an altitude or place where it does not. That almost resulted in a collision twice. The inspection further noted messages about drones flying out of sight and losing a battery flying in fire in a panty bag of a 'drone flyer'.

Figures on the number of Dutch who have a drone do not have the ILT.