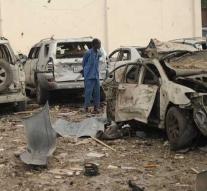 mogadishu - The death toll of the attack with two car bombs in the Somali capital Mogadishu has risen from eighteen to 45. That is what a government official said on Saturday. At least 36 people were injured.

The explosions were Friday near the presidential palace and a hotel. Terror group al-Shabaab has claimed responsibility. According to the police, strangers opened fire on security personnel at a checkpoint. Then a bomb went off. The other car that flew into the air was parked in front of the hotel.

In October, a suicide bomber blew himself into a truck full of explosives at a busy intersection in the city. More than three hundred people were killed. Somali Islamic fundamentalists from al-Shabaab have been active in Somalia for several years.