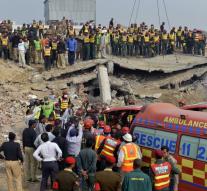 lahore - The death toll in the collapse of a factory in the Pakistani city of Lahore on Thursday increased to eighteen. Rescuers search for 150 people missing and were believed to be under the rubble. Therefore, it is feared that many more deaths.

About eighty people have been injured and are in hospital. The rescuers have at least 35 people out alive from the rubble managed to get. There are indications that more people alive trapped under the rubble.

It is not yet clear what caused the collapse Wednesday. At the building were carried out construction work. After the earthquake in northern Pakistan ten days ago collapsed the roof of the factory.

The plant bags are made ​​. Pakistan is also known as a country where the contractors building and construction rules to flout.