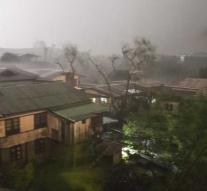 manila - The death toll in the Philippines by the typhoon Mangkhut has risen to at least 25. That is what the disaster coordinator of the Philippine government has announced. The majority of the victims were killed by landslides in mountainous areas. Reports on possible victims still have to be received from various areas.

The typhoon, the heaviest of 2018, moves towards Hong Kong and the Chinese coast and is expected to increase in strength over the South China Sea.

In Macau, the authorities ordered the closure of all casinos in connection with the approaching typhoon. It is the first time since new licenses have been issued in 2002 that gambling in the former Portuguese colony has been shut down.