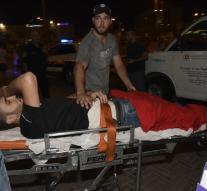 - A shooting at a bus station in the Israeli town of Beersheba on Sunday, three people lost their lives . Among the dead are the shooter , a soldier and a man who was mistaken and was shot a second attacker . Eleven people , four soldiers and seven civilians, were wounded. According to police, the perpetrator was a Palestinian .

The man enters the protected bus station and shoot dead an Israeli soldier with a gun.

He then used the weapon to the victim to shoot around. He also attacked people with a knife. The gunman was ultimately slain by police.

Initially, the authorities have pointed out that there were two, were presumably Palestinian, perpetrators. Later it turned out to be one person. His identity is not yet known.