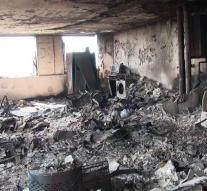 london - Certainly sixty tall buildings in the United Kingdom do not meet the fire safety requirements. According to tests conducted after the fatal fire in a residential tower in London, the British government reported Sunday.

British officials are investigating about six hundred tall buildings in the aftermath of the fire in the Grenfell Tower. Thousands of Londoners had to leave their apartments on Friday after the fire department had concluded that the apartment buildings were insecure.

Because of the fire in the Grenfell Tower, 79 people died earlier this month. The fire is presumably created in a refrigeration freezer. The fire could then spread rapidly through the flammable wall covering on the living tower.