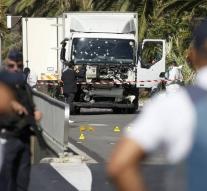 - "In the investigation of the bloody attack on July 14 in southern France Nice are made more arrests. According to the newspaper Nice-Matin since Monday eight people arrested."

"All those arrested are from the same department as Nice (Alpes-Marit Ines) and would allow the perpetrator, Mohamed Lahouaiej Bouhlel (31) know. Previously, six people arrested in this case. Bouhlel driving a large rental truck in the crowd who had come to watch fireworks on the beach. There were 86 dead and hundreds injured."