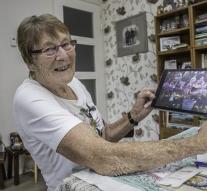 amsterdam - More and more elderly people use social media to see what their offspring are doing and to chat, post, liken and share. Of the 65-plus, 39 percent last year used social media like Facebook, LinkedIn or Twitter, 26 percent in 2014. This is evidenced by CBS figures. The difference in use with young people is getting smaller.

The 87-year-old Bep Mooy, Groot- and Great-grandmother from Wijdewormer, regularly takes her tablet to send messages to children and grandchildren via Facebook Messenger. 'You'll stay a little bit up to date. I respond to photos and get a response again, that's nice. And if, for example, I had help from family members in the garden, I would like to thank you for a second. '

Bep makes sure she does not use her tablet too often. 'It's a time consuming activity. I prefer to walk in the garden. Going to that screen for a long time, I get sleepy eyes. 'She rather climbs in the pen if someone is sick or someone's partner died. 'If anyone is a birthday, I will send a card. I just like that. I also like it when mail arrives. It's more tangible because it stands for your nose. Messenger I feel impersonal. '

According to Diederik Broekhuizen, founder of the Best Social Awards, the elderly find it important to have direct contact with each other.

'The communication that social media is meant for. I find it amazing that older people, if they are less mobile, can still participate in society in this way. '

For fervent Facebooker Piet Boonman (74) from Ovezande, it seems that he has always used this social media. He is active at the Zeeuwse afdeling van de ouderenbond KBO-PCOB. For that he writes and shares something on Facebook and Twitter.

Elderly people find it positive that an increasing proportion of their social media use. Renée de Vries of the Anbo: 'It is very low-threshold. Especially if you're not so mobile anymore, it's easy to chat with people. '

But it's not a magic formula to resist loneliness, says the Anbo president.

'It can provide a helping hand, but loneliness has more feet in the earth, such as drinking coffee or visiting someone. Social media are not for everyone. '