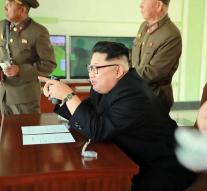 seoul - The South Korean authorities are gearing up for a special milestone: the number of North Korean defectors in the country reached the 30,000 expected this month. Therefore, the government in Seoul is taking steps to help newcomers integrate, message state news agency Yonhap.

The Ministry of Unification announced on Sunday the end of October 29.948 former North Koreans living in the south. An official said he expected that the limit of 30 000 is reached in mid-November.

Seoul was planning to seize the opportunity to launch a new integration project. The refugees have for example more help in finding work.

The number of North Koreans it to the neighboring country flight this year increased by 21 percent compared to 2015. This, according to Yonhap come partly because dictator Kim Jong-un increasingly extreme methods such as public executions used to be people in line hold.