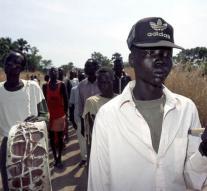 juba - Armed groups in South Sudan have recruited since the beginning of the year more than 650 children. Reported UN children's organization UNICEF, which calls for the unconditional release of all children,, ''.

The recruitment of children, according to UNICEF by armed groups not a new phenomenon in the violence-plagued country. Since December 2013 were recruited by the organization estimated that 16 000 children.

UNICEF still saw last year to the 1775 release of former child soldiers.,, Now the fighting and once again increase recruitment in Southern Sudan, it seems that this demobilization is negated at a rapid pace, '' said the children's rights organization Friday.


Southern Sudan for nearly two years was a civil war, in which tens of thousands of people have been slain. The warring parties signed a peace agreement in 2015, but last month it still came back to fighting in the capital Juba.