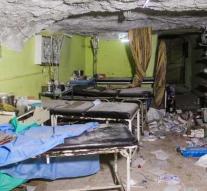 geneva - In the first two months of this year, 67 medical centers and health workers were attacked in Syria. That is as much as half of the number of attacks on medical facilities throughout 2017, the World Health Organization (WHO) reported Friday. Every attack on doctors is 'unacceptable', according to the WHO.