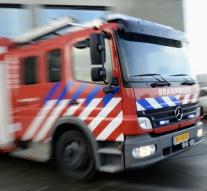 The action is directed against a plan by the employers to raise the retirement age to sixty years. That found the firefighters not a good idea because they do hard and dangerous work. At present this age, depending on length of service of 55 to 59 years.

The nature of the action varies according to the FNV each force.,, In some cases there is only plucked in emergencies and it can take longer for example, is extracted an cat out of the tree, '' said FNV negotiator Bert Haas. Other example,, corps will still be off on all reports but do not work longer in the barracks, such as maintenance and cleaning. ''