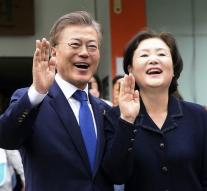 seoul - Moon Jae-in (64), according to an exit poll, became the biggest winner of the presidential elections in South Korea on Tuesday. In the outcome of the election poll immediately announced after the polls closed, the candidate of the Democratic Party received 41.4 percent of the votes.

His main rival conservative Hong Joon-pyo does not exceed 23.3 percent of the votes, reported all major television stations in the country.

Moon is the successor to Park Geun-hye, the first female president of the country, who received a majority of voters at the end of 2012. Park had to resign due to corruption and abuse of power. She has been formally accused and can be sentenced to life imprisonment.