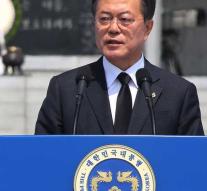 seoul - South Korean President Moon Jae-in expects the summit between the US and North Korea to be the beginning of a years-long process. 'If the two leaders have started a dialogue, a long process of one or two years or even longer will be needed to fully resolve all issues,' said Moon according to news agency Yonhap.

Moon thinks that the summit meeting in Singapore will be a success, but warns against too high expectations. 'The deep-rooted hostility in the relationship and the North Korean nuclear issue can not be solved at one go during a meeting between leaders. '

The South Korean said, however, to have confidence in the willingness of Donald Trump and Kim Jong-un to reach an agreement. He said that Kim has shown a willingness to denuclearise, among other things by dismantling the nuclear test site Punggye-ri.