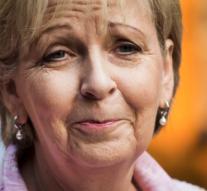 - With an outcome reminiscent of exotic dictatorships Saturday in North Rhine-Westphalia, the Social Democratic Prime Minister Hannelore Kraft re-elected as party leader of the SPD in its state. The popular government leader received the 445 congress participants in Bochum 98.4 percent of the vote. The SPD has approximately 110,000 members in the state of nearly 18 million people bordering the Netherlands.

The 55-year-old Kraft could not hold back her tears upon withdrawal. Which is even higher than two years ago, when 95.2 percent of the members chose her as a leader, but less than Krafts 'record year' 2012 when she received the support of 99.1 percent of party members.

Kraft was in 2010, Prime Minister of North Rhine-Westphalia. She said he sat proud that since one in every three euros issued by the state government, goes to children, education and family policy. In mid-May, there are parliamentary elections in the state. That's three months before national elections.

The SPD hopes in the state that the party with Kraft in the lead can remain the largest. The Social Democrats were in a recent poll supported by more than a third of respondents. The christendemocratsiche CDU was 28 percent and the new right-wing populist anti-immigration party AfD (Alternative für Deutschand) was third with 11 percent. Kraft currently governs with the Greens, who received 10 percent polling.

In national politics, the SPD under pressure in polls. The party would this weekend only 22 percent of German voters behind them, according to the Forschung Gruppe Wahlen.