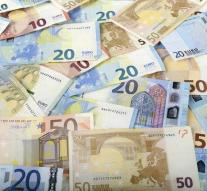 geneva - The UBS bank in Geneva and three adjacent restaurants have a remarkable clog of their toilets. In the toilet bowls some 500 euro banknotes were found. The total value of the clogging is 100,000 euros.

The companies have made a declaration of the discovery. At the bank it was found that the toilet in the locker room was hidden with money. The local newspaper Tribune de Genève points out that the money belongs to Spanish women who had already left the money in a vault a few years ago. The Swiss court has undertaken to investigate the matter and determine the origin of the bills.

Moreover, the European Central Bank announced last year that the issue of 500 euro notes will be discontinued by the end of 2018, including the financing of terrorism and undeclared work, as well as money laundering.