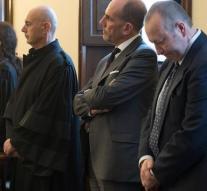 vatican - A former Vaticanian employee has been sentenced to one year in a cell because he spent hundreds of thousands of euros on gifts intended for a children's hospital for the luxury cardboard card.

The former employee is named Giuseppe Profiti, and was head of the Bambino Gesu Hospital. For this, 420. 000 euros were collected. Profiti decided to apply the money for the renovation of a luxury flat of Tarcisio Bertone (82), a prominent cardinal. In the time of Pope Benedict XVI, he was the second man of the Vatican.

The Public Prosecutor had demanded 3 years, but the judge decided otherwise. However, Profiti has to pay a fine of 5,000 euros.