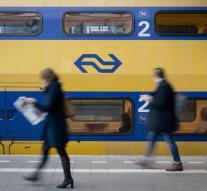 the hague - Members of FNV Spoor will work on Monday morning between 05:00 and 09:00 at the stations The Hague Centraal and Zwolle. The result of the actions may be that fewer or no trains run from these locations.

The action-intensive employees want to say that NS again relies on regional regional concessions, stops employment from the regions and maintains the employment of the shops and hospitality at self-managed stations. The NS employees also want their employer to employ two conductors on all double decks, the trade union reported on Friday.