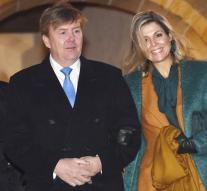 erfurt - King Willem-Alexander and Queen Maxima stand Wednesday on the second day of their visit to Germany reflect on the victims of the Second World War. They do this in the former Buchenwald concentration camp near Weimar. In this camp were put imprisoned an estimated 3300 Dutch from May 1940, of whom more than five hundred were killed.

Buchenwald was built in 1937 as a camp for those who regarded the Nazis as an opponent or undesirable element of society. Later prisoners from across Europe with it. In total, fixed at Buchenwald put 280 000 people, of whom 56 000 were killed. The royal couple will tour the former camp and lay flowers at the memorial.

Apart from Buchenwald visit the royal couple also Erfurt, Weimar and Jena, and the day ends with a trade dinner in Leipzig. In that city, a day later paid attention to Dutch forced laborers who had to work in a munitions factory during the war in Leipzig.