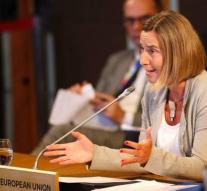 strasbourg - The treatment of migrants in Libyan detention centers is inhuman and unacceptable. The EU therefore urges Libya authorities to conclude that they are closed if there is no improvement, said Federal Minister Federica Mogherini Tuesday in a debate in the European Parliament in Strasbourg.

'People are treated as animals. A tragedy that nobody can deny or ignore ', according to the Italian.

Medical Assistance Organization MSF recently stated that the EU is co-responsible for this situation because of European migration policy. Several European parliamentarians spoke of 'Fort Europe' and called the policy 'hypocrite.' '

Mogherini suggested that the fight against trafficking in human beings and slavery should begin to yield fruit. Partly due to the training of the Libyan coastguard and measures at the southern border of Libya, fewer people died at sea and in the desert.