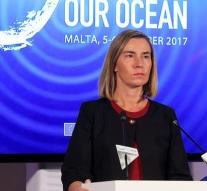 brussels - Termination of the agreement on the Iranian nuclear program is not in the hands of President Trump. 'The President of America has a lot of power, but not about that. The Iran deal is not a single country. It is a multilateral agreement that was negotiated after 12 years and was unanimously endorsed in a UN resolution. '

EU Foreign Minister Federica Mogherini said this in Brussels in a response to the news that Donald Trump will not certify and possibly terminate the Iran Agreement in 2015. She also said that the agreement 'of 104 highly technical pages' could not be renegotiated. Mogherini was one of the driving forces behind the 2015 agreement between Iran and six world powers including the United States.