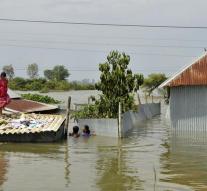 new delhi - The annual returning moesson has cost 1500 people in recent weeks in southern Asia. In India, most of the victims were affected by floods: over 1300.

Nepal and Bangladesh also received their share of the heavy rainfall. In these countries, there were certainly 140 deaths. Recently, one third of the total land area was underwater in these two countries.

In India, the northern state of Bihar is most affected by the monsoon. In Mumbai, India's largest and busiest city and the capital of the state of Maharashtra, Tuesday came to a halt on public life due to the flood.

The International Red Cross is as usual aware of the outbreak of contagious diseases. In total, 41 million people have been affected by the floods in the three countries. The monsoon period lasts from June to September.