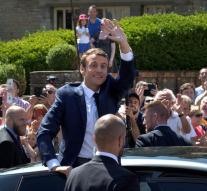 paris - The French choose the 577 members of parliament today and next week. The animo was not very big: at 12 o'clock no 20 percent of the electorate had to come up days.

With an increase of 19.24 percent, fewer people came than in 2012, when it was 21.06 percent. According to surveys, around 40 percent or more of the French remain at home.

The rise is usually lower than in the presidential elections. The French arrived at the polls after April 23 and May 7. Then 78 per cent and 75 per cent of the electorate arrived.

The low turnout probably has to do with the polls, which indicate a big profit for Macron. He finishes according to the polls in the second round with over 60 percent of the seats for his tiny party La République En Marche! Many voters argue that their voice does not matter anymore.

Today and next week 577 mini-elections are being fought. A number of constituencies play an exciting battle. Thus, there is a great chance of losing former Prime Minister Manuel Valls, who lost the ground in the Party of Socialists, from the extremist candidate Farida Amradi. Valls previously announced that he wanted to be on Macron's list, but he was denied by La République and Marche. The party was clement and did not present a candidate in this area, but that does not help the former cabinet leader.

Marine Le Pen, who lost in the second round of presidential elections, makes this opportunity to come to the Assembly National. That did not succeed her the previous two times. One of her two current MPs, Gilbert Collard, probably is home to his place. He loses in the gard of ex-bullfighter Marie Sara.