Home / World / Model killed in Iraq because of appearance 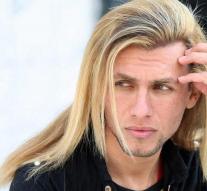 baghdad - A male model that was brutally murdered in Iraq would have been attacked because of its appearance. That says friends of Karar Nushi. Due to his long hair and his striking clothing style, he had already received several death threats online.

The student of The Institute of Fine Arts was an actor and model. He was found dead in northern Baghdad, according to Iraqi News. Karar turned out to be stunned and maltreated.

The model was reportedly busy preparing for a beauty election for men.