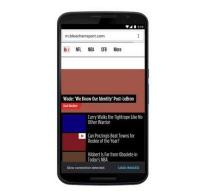 - Internet giant Google will soon release an update to the Android version of Chrome web browser, allowing the sites to ' slim down ' if it detects that the data connection is slow.

If the new 'Data Saver' mode is enabled and the network is slow, the browser only downloads the text on a page. The user can then decide whether he wants to get all the photos at once, but each image can be downloaded separately. The new feature primarily intended for users in emerging markets and will also be rolled out first in India and Indonesia, but will later also be available in other countries.
NEW