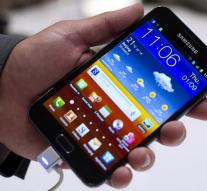 - A smoking telephone on Friday as panic caused in an Indian plane that Singapore was on his way to Chennai, but landed safely. Passengers on board the aircraft of IndiGo sniffed a strange air coming from the luggage compartment above their heads, and warned cabin crew. Which met in the locker a crackling and smoldering mobile to type Samsung Galaxy Note 2.

Although there was no fire, the crew used a fire extinguisher to avert imminent danger. The phone was then placed in a container of water. The South Korean manufacturer has recently got in trouble because batteries in the newest model, the seven could explode. That led to the decision to recall large quantities of these smartphones. The Note 2 came out in 2012 on the market and showed no known cures.