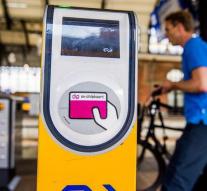 the hague - The introduction of the OV chip card on the mobile phone did not go 'flawlessly', but the technical issues have now been solved. That said Translink- the company behind the OV card- said state secretary Sharon Dijksma (Infrastructure) Wednesday in a letter to the Lower House.

When the 'OV-chip mobile' app was launched in late May, it immediately hit many childhood diseases. There were problems with registering and logging in. In particular, customers of telecom company KPN suffered from this.

These problems are now unsuccessful, according to Dijksma. 'Public transport companies are phased accessible to travelers by OV-chip mobile. 'According to Translink, the current 5400 users would be satisfied and the number of users would increase.

At the end of this year, a trial in The Hague should begin, which makes it possible to check in and out with the card in public transport.