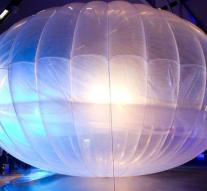 washington - Google's parent company is able to deliver communications bubbles to Puerto Rico, which can restore mobile phone service on the island. More than 80 percent of all mobile communications transmitters are still unusable.

Called by the balloons called Project Loon, some of the mobile phone traffic can be restored. Alphabet, as the company is called, received Friday permission from the US government to use the balloons.