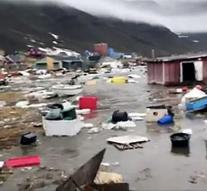 now - On an island in front of the west coast of Greenland, four people are missing after an earthquake and tsunami in the night of Saturday on Sunday. Seven were injured. Of the more than one hundred residents of the island of Nuugaatsiaq, 78 had to be put in safety. The police are still looking for 23 others. They are not officially missing as they may be found at sea or elsewhere in Greenland when the earthquake and tsunami occurred.

The earthquake had a force of 4.0. Through the quake and tide, eleven buildings were damaged or washed away.

Tsunamis are more common on the coast of Greenland. According to geologists, those caused by landslides and degradative ice from melting glaciers.

Greenland belongs to Denmark, but the 57,000 inhabitants have been autonomous since 2009.