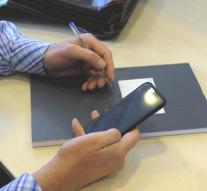 - Missing people will be able to be detected more easily. The Ministry of Security and Justice wants to make it legally possible to gauge their phone. Such an agent can make the difference between life and death.

The standard technique agents can quickly determine the location of the missing. The department wrote to legislative purpose and expected after the summer to be ready.

Currently, officers may not fathom phones as parents or other relatives of a missing knocking in despair at them. Legally may now only in criminal proceedings, as sought to be an offender after a crime. But if someone is just missing cops would just like to prevent it from turning into a crime.


A spokesman for Minister Van der Steur (Security and Justice) said that agents in 'urgent disappearances' will have the same legal options as in a criminal case. That should include the gauge at.

CDA MP Van Toorenburg asked the ministry to such regulations. She is happy that the department it has gone to work. Such means may be essential, she says.