Home / World / Missing ferry had a hundred people on board 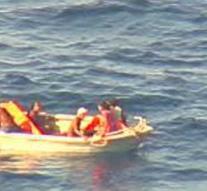 wellington - The ferry that disappeared in the island state of Kiribati probably did not have fifty but a hundred passengers on board. President Taneti Mamau said on Monday that there were probably twice as many passengers on the wooden catamaran as had been assumed until now, reported Australian media.

The boat departed from the island of Nonouti on the 18th of January to the 260 kilometers north of Betio, where the vessel had to berth two days later. That never happened.

On Sunday, another seven survivors were rescued from the suspected shipping disaster after being seen by the crew of a New Zealand Air Force aircraft.