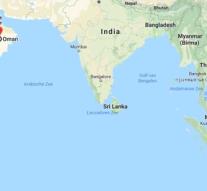 copenhagen - Four people are missing after the outbreak of a fire on a large container ship in the Arabian Sea. It concerns a ship from shipping company Maersk that was delivered in 2017.

Rescuers were able to get 23 other crew members from the Maersk Honam. The vessel was en route from Singapore to Suez when Tuesday broke out due to an unknown cause. The ship then sailed about 1400 kilometers southeast of Oman.

The fire is still raging and the situation is described as 'extremely critical' by the shipping company.