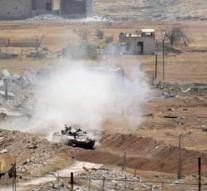 amman - In Syria, some military bases have been targeted by rocket attacks, according to the Syrian army. It is not clear who is responsible for the attacks. The Syrian state television showed images of some heavy rock explosions, including in the neighborhood of Hama and Aleppo. An Iranian militia would also be stationed in Hama.

There is suspicion that Israel is behind the attacks. Earlier this month, the country still managed to take action against the growing influence of Iran in Syria.