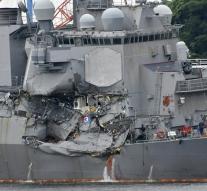 The USS Fitzgerald arrived in collision with a Filipino container ship on Saturday at the mouth of the Bay of Tokyo. The torpedo boat hunter then made water.

The USS Fitzgerald commander was taken to a hospital by the Japanese Coast Guard by helicopter. Two other crew members are also hospitalized.