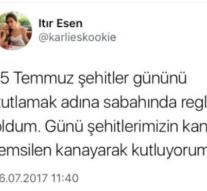 istanbul - One day after her election to Miss Turkey in 2017, new beauty queen Itir Esen has taken her title after a tweet about the attempted coup in Turkey.

The organizing committee called the controversial tweet unacceptable and incompatible with the aim of promoting Turkey's image in the world.

According to the newspaper 'Sözcü', Esen wrote exactly one year after the coup attempt: 'I had my period this morning to celebrate the martyrs day of July 15th. I celebrate the day by bleeding for our martyrs. '

The organization released Friday after a thorough investigation concluded that the Twitter message actually came from the 18-year-old Esen. The second placed Asli Sümen in the Miss-election is now awarded the title.

In the attempted coup against President Recep Tayyip Erdogan, according to official figures, about 250 people were killed in Turkey on July 15, 2016.