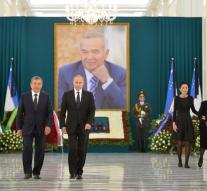 Karimov died a few days after he was hit by the stroke at the age of 78. He had ruled with a heavy hand on Uzbekistan for 27 years and was buried Saturday in his hometown of Samarkand.

Mirzijojev is seen as a leading candidate to succeed Karimov. He was in charge of the funeral and visited earlier this week, Russian President Vladimir Putin. According to the law of the land should be held within three months presidential election.