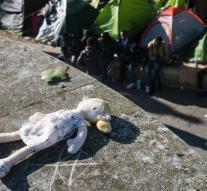 - The French authorities Wednesday began moving about 1,500 child migrants from Calais. The departure of these young people just arrived in the port city is the completion of the closure of the 'jungle', the chaotic settlement of migrants who want to cross from Calais to England.

The migrants are accommodated in shelters elsewhere in France. Paris and London are fighting over the fate of the minors, because many claim to have relatives in Britain. The British were minors should include, says the French government.

In mid-October were in the controversial slum in Calais still between 6,000 and 8,000 people. With the departure of minors and the demolition of the slums have the 'jungle' are in the past few days. President Francois Hollande has secured across French media that there are no slums will rise more.