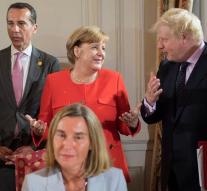 sad - A mini-tip with a number of leading European countries has offered six Balkan weddings a perspective for further rapprochement to the EU. The final statement of the meeting in the Trieste Trieste states that the future of Serbia, Montenegro, Albania, Macedonia, Bosnia and Herzegovina and Kosovo is in the European Union.

The objective is to help the traditional conflicts between these Balkan countries, who themselves want to join the EU, through the strengthening of economic cooperation. For example, the construction of highways and gas pipelines should be promoted, as is the uniformity of the customs regulations.

At the top, Germany, France and Italy included. By striking a hand, they offered the candidates for the Balkans hope. 'Political stability in the region also means stability for us,' said German Chancellor Angela Merkel before the start.