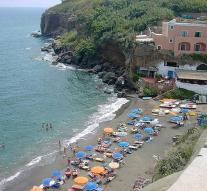 - France, Germany and Italy hold a mini-summit on Monday. Francois Hollande, Angela Merkel and Italian Prime Minister Matteo Renzi meet to discuss the direction of the European Union after the British departure.

Further, the situation in Turkey and the refugee crisis on the agenda was a spokesman for the French president released.

The mini-summit will take place on the island of Ventotene, west of Naples on the west coast of Italy. It is a symbolic place, according to authorities. Politician Altiero Spinelli was held prisoner by the fascists. He wrote- for lack of papers on paper- the Manifesto of Ventotene.


The famous document advocating Spinelli and Ernesto Rossi co-writer for a united Europe. War is no longer an option if Europe merges into one federal state, was the main idea.