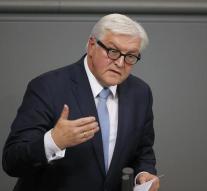 - This week ministers perform in New York talks about the situation in Syria. Both France, the United States, Germany and the European Union and neighboring countries of Syria and Russia participate in the Summit. That the German Foreign Minister Frank-Walter Steinmeier said Monday in Paris.

Steinmeier met in the French capital his French and American counterparts Laurent Fabius and John Kerry and several Arab representatives in preparation for the talks in New York.