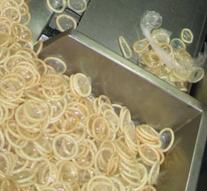 harare - A spokesperson for a Chinese condom manufacturer said they are strongly considering offering their products 'in different sizes' after the Zimbabwean Health Minister complained that the contraception from China exported to Africa was 'too small' for the men from his country.

Minister David Parirenyatwa said this during a promotion event in Harare, where fighting for HIV / AIDS prevention takes place. This reports the New Zimbabwe site. 'The southern region of Africa suffers from a very high percentage of people with hiven, so we promote the use of condoms. The youth is charmed by a certain condom, but they are no longer manufactured by us, 'said the minister at the event.

Fortunately for Parirenyatwa, the condom company from China, Beijing Daxiang, already planned to produce several sizes. 'We have the possibilities and feel it is our duty to contribute. So we have researched various data from our customers in that region and we are preparing to offer multiple sizes, 'said CEO Zhao Chuan in the South China Moring Post.

Zhao is used to having different wishes. In China, for example, the men prefer thinner condoms, because they 'do not worry about size'.