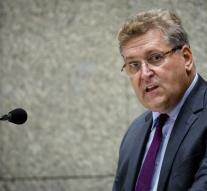 - The old minister Lodewijk Asscher would rather not congratulate Henk Krol. The Lower House member of 50PLUS already has a few times congratulated dead people.

Krol put last time congratulations on Facebook for two people who were already deceased, including the writer Joost Zwagerman. He regretted the incidents.

When Krol Tuesday on Twitter called to congratulate Asscher (42), they promptly responded with their own tweet: ' I'd rather not! Feel alive. ''