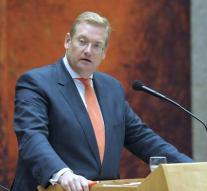 rotterdam - Minister of Security and Justice Ard van der Steur must address the problems in the port of Rotterdam. That leader of the Dutch Police Union (NPB) Jan Struijs told EenVandaag.

According Struijs need for detection to be extended, the information in order, there must be guarantees for a firmer approach to organized crime and requires an investigation into corruption.

In recent months, the police union spoke with people working in the port area. Giving according to him that they catch the small fish, but that the 'big boys' are not picked up by a lack of capacity and poor ICT. On important matters should not be investigated.

Tensions were incurred in the port because of the corruption case against two customs officials, who in individual cases of suspected containers with hundreds of kilos have passed drug criminals.