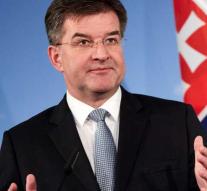 bratislava - The Slovakian Foreign Minister has resigned angrily Thursday evening. The non-party Miroslav Lajcak decided to file his resignation in protest of the rejection of the controversial migration pact of the UN that will take place in Marrakech next month. The parliament in Bratislava voted against it with a large majority.

The Slovak government also sees nothing in the global treaty for safe and regulated migration. 'Because in this form it is not in keeping with the security and migration policy of the Slovak Republic', was the explanation of the coalition, consisting of social democrats and right-wing populists. Of the 150 parliamentarians, ninety voted against the pact, only fifteen were in favor.